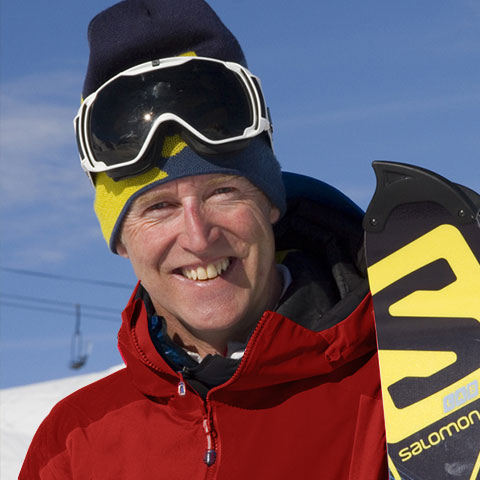 It seems a long way from Cornwall, but since 1996 Val d'Isère has been home for Rupert Tildesley. Qualified to the highest level in both the British and French systems, Rupert is one of the most experienced top level ski coaches in the world.

He is a BASI Trainer and member of the British Demonstration ski Team and represented the UK at the International Ski Instructors Congress in Switzerland in January 2003, Korea in January 2007, Austria in 2011, Argentina in 2015 and Bulgaria in 2019. The purpose of the congress is to raise the levels of Ski Instruction internationally and to share teaching methods across the globe. Rupert competes on the FIS Masters World Cup has previously won the British Masters championships in slalom and GS. He is also director of ICE - a training centre for aspirant ski instructors in the BASI system.

He has recently been involved with the rewriting of the BASI Technical Manual, drawing on considerable experience and technical knowledge of the sport.

Outside of skiing, Rupert is a keen kitesurfer, sailor and cyclist. He competed on the World Cup in the 49er and in the 49er World Championships in Lake Garda in July 2009 and was the first person to complete a land to land crossing of the Irish Sea by kitesurf (c.f www.thecrossing.org.uk).

Rupert is also managing director of Saturn Innovation Ltd, web design and multimedia company. Saturn Innovation are one of the biggest names on the marketing side of the ski industry having designed many skiing related websites, including this one and www.icesi.org . To find out more about Saturn Innovation go to www.saturninnovation.com